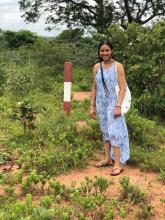 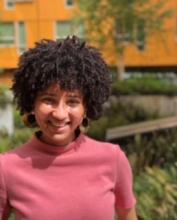 Christelle Silué, a senior double major in French Studies and Public Health is putting her time and education to good use this summer. Originally from Abidjan, Côte d’Ivoire or the Ivory Coast, Christelle went back home this summer and decided to take advantage of the opportunity to do research for an independent study course and to do some local advocacy work.

Christelle moved to Everett six years ago and realized “she didn’t want to lose touch with French” so she decided to continue studying the language and to major in French at the UW so she could “truly understand the complexity of the language.” Under the guidance of Associate Professor Richard Watts, Christelle is completing a country report on the history, politics, and public health of the Ivory Coast while in particular examining the high rate of maternal morbidity in the country. She chose this topic due to her interest in public health and to study “how people’s health/healthcare are affected by their background and ethnicity.”

Regarding her research Professor Watts says “Christelle brought an understanding of Ivorian culture and history to bear on the current state of public health, in particular maternal health, in Côte d’Ivoire.” It was gratifying to watch the project evolve as she met with doctors and other health practitioners who continue deal with the legacies of the country's recent civil wars. The work she did perfectly conjugates her studies as a Public Health and French double major.”

In addition to her research project Christelle organized a school supply drive here at the UW and gave the donated supplies to a local school in the Ivory Coast. Christelle decided to organize the drive because she says “coming from a country like the Ivory Coast I didn’t have much growing up” and “being in the US has granted me so many opportunities.” Back at the UW, Christelle is a part of the Students of Color in Public Health club where she serves as the Membership Chair to foster connections between the members, graduate students and alumni.

Christelle recognizes Professor Watts and her advisor Sabrina Tatta as “two individuals that have always believed in me and pushed me to try new things” and “believe in myself no matter what.” Sabrina introduced her to the Carlson Center Internship program where she was chosen to present her work at the symposium. Sabrina lauds Christelle as “an example of what we hope all UW students will have an opportunity to do which involves discovering and cultivating their passions, connecting the dots between them and to the world, and finding their own way to contribute to the greater good in both ways that are easy to discern as well as ways that remain intangible.”

Christelle plans to graduate this coming spring and is considering a graduate program where she would study global health and potentially do more research abroad to advance her long-term goal of fighting for better healthcare for minorities.