W14 Course: The Age of Discovery Through Italian Literature and Culture 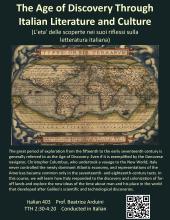 The great period of exploration from the fifteenth to the early seventeenth century is generally referred to as the Age of Discovery. Even if it is exemplified by the Genovese navigator, Christopher Columbus, who undertook a voyage to the New World, Italy never controlled the newly dominant Atlantic economy, and representations of the Americas became common only in the seventeenth- and eighteenth-century texts. In this course, we will learn how Italy responded to the discovery and colonization of far-off lands and explore the new ideas of the time about man and his place in the world that developed after Galileo's scientific and technological discoveries.