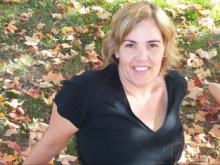 Anne Latowsky received her Ph.D. in French Studies from the University of Washington in 2004. She wrote her dissertation under the direction of the late Eugene Vance, who continued to provide crucial support long after her graduation. She also worked with Denyse Delcourt and Robert Stacey, who generously allowed her to take his year-long training course for medieval historians.

She is currently Assistant Professor of French at the University of South Florida in Tampa, where she offers a wide variety of courses in French literature, civilization, and linguistics. In 2007, her article "Foreign Embassies and Roman Universality in Einhard's Life of Charlemagne," was awarded the Van Courtlandt Elliott Prize from the Medieval Academy of America for outstanding first article in the field of medieval studies. Her work on the medieval Charlemagne legend was supported by a year-long Faculty Research Fellowship from the National Endowment for the Humanities in 2009-2010, which allowed her to complete her book, Emperor of the World: Charlemagne and the Construction of Imperial Authority, which is forthcoming from Cornell University Press in 2013.