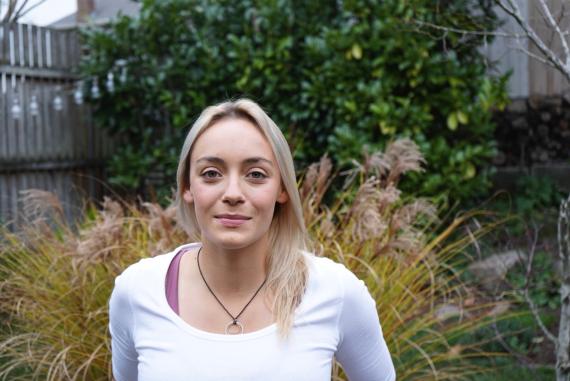 Anna Sulc, a senior completing a double degree in French (BA, honors) and Oceanography (BS) received the Míċeál Vaughan Award for 2019-2020. This prestigious award was created by Professor Emeritus Míċeál F. Vaughan of the UW English department to support travel to primary research libraries and archives for projects involving European texts. Anna grew up in Southern California and Prague as her parents are from the Czech Republic.

This past summer Anna used the award to travel to Paris to work in the archives of the BNF (French National Library). These archives gave her direct “access to publications, correspondence and literature from the 17th century.” For her honors thesis in French Anna is working with texts written by female authors (précieuses) from the mid-1600s. She is “particularly interested in the work and correspondence of Madeleine Scudéry who led one of the most important literary salons at that time and was considered one of the most popular authors of that era.” Using her correspondence and the software program Python, Anna plans to “write a computer program to help understand the relationships between the members of her literary salon.”

Being fluent in French helped Anna navigate Paris and the libraries with ease and made “communication with locals and librarians an enjoyable experience.” Studying the history and the literature of France, Anna says “has helped me understand the importance of learning about a country through its language and literary culture and helped her understand some of the obstacles France is facing today. “Looking at our past helps us shape our future and tell the story of how we got to where we are today.”

Anna also works part-time in Professor Dee Boersma’s Ecosystem Sentinels lab studying Magellanic penguins. She has gone to do field work in Punta Tombo, Argentina for the last two seasons to compare ocean productivity with penguin foraging behavior. Anna says that studying French while undertaking STEM major has changed the way she is able “to communicate data and ocean research to the public.” Studying a language all while studying the science of oceanography has helped her share her knowledge of the oceans.

Being a French major at UW, Anna says, means being part of “a small, tight knit and welcoming community” where I can work closely and comfortably with professors and advisors and I can approach faculty with any questions about classes or my career path in general.” Anna has worked with Associate Professor Geoffrey Turnovsky for over a year now. “He has provided amazing guidance, expertise on 17th century literature and feedback in my previous project working on female authorship from the 1600s and has helped me develop my independent research project in to the topic for my honors thesis this winter.”

Anna is currently applying for the Mary Gates Leadership Scholarship for a project where she hopes to visit high schools around Washington State to “inspire students to get involved in the conservation of our oceans using art, music and history rather than data and numbers.” As a double major in Oceanography and French she “wants to show that even research in the humanities can be relevant and essential to conservation.” After graduating, Anna plans to dedicate herself to a project called Global Oceans – Human Culture that will let her investigate “the importance of the oceans in the humanities and how our perception of it has changed over time.”