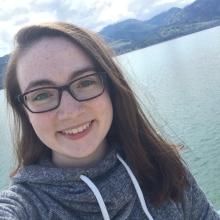 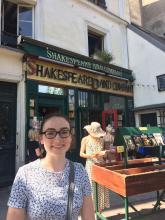 French & Italian Studies would like to congratulate Ashley Beeman, a graduating senior and double major in French Studies and English Literature on being awarded the 2018-2019 Dean’s Medal from the Division of Humanities. The Dean’s Medal is awarded to the top graduating senior in each of the four divisions of the College of Arts & Sciences.

Ashley, a native of Bremerton, Washington became interested in French as a child when her ballet instructor spoke in French. In junior high and high school Ashley says she had two influential French teachers who “encouraged me and showed me how much fun language learning could be.” Ashley actually declared French as her field of interest by accident before she started at the UW but was encouraged to major once she arrived on campus and started taking classes. Given her natural interest and ability in French she ended up majoring and says now it was the “best accident ever!”

Ashley has stayed busy during her time at the UW. She has been a member of the UW symphonic band for all four years on campus. She also has worked at UW Libraries Special Collections for two years, which she says “has been one of the highlights of my time at UW, it’s an amazing library with amazing historical treasures”. At Special Collections Ashley was able to do research for multiple projects using books dating back to the 17th century. Ashley put her expertise into practice when she took the lead on a project for French & Italian Studies, cataloging a set of 18th- and 19th-century French books donated to the department.

Ashley thanks the entire French department for encouraging her to pursue her love of French. She says French Lecturer Lorenzo Giachetti encouraged her greatly when she was new to UW “and made me eager to stick with French and major in it.” She gives credit to Associate Professor and Chair Geoff Turnovsky for helping her realize her love of history and old books, which led to her working in Special Collections. Ashley would also like to thank Senior Lecturer Hélène Vilavella-Collins, and Principal Lecturer Hedwige Meyer for their guidance and encouragement during her month in Paris with the summer Study Abroad program. While giving her a close group of friends, the program greatly improved her speaking skills and opened her “eyes to the beauty of the French language and history.”

Reflecting on her time at the UW, Ashley says as a new undergraduate “she wasn’t sure what she wanted do with French” and “what career options there were for language majors.” Ashely had “no idea how much of an impact studying French” would have on her life. After taking French classes she came to realize that “there was so much more about French that interested me other than just the language itself - my interests expanded to include French history, linguistics, and culture, and the rest of the Francophone world.” She believes “that a second language is a second perspective from which to see the world” and says “studying French at the UW has really opened up the world for me.”

Taking Translation Theory & Practice with Associate Professor Rich Watts “completely changed” Ashley’s perspective on French and given her a window into a potential career. After taking the course, Ashley realized “translation was something I was incredibly interested in” and she has been thinking about pursuing work in translation ever since. Ashley isn’t planning on graduate school right now. She wants to find a career where she can apply her passion for French translation and history. The department of French & Italian Studies would like to wish Ashley the best of luck with her post-graduation plans and congratulate her again on the tremendous achievement of being named Dean’s Medalist of the Humanities Division.