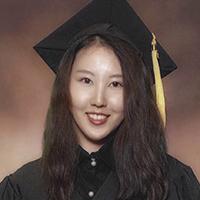 Graduating French and Mathematics major Chenyibo Zhu was recently named the Humanities Division Dean's Medalist and a gonfaloniere. French & Italian Studies nominated Chenyibo and the College of Arts and Sciences awards the Dean’s Medal to the top graduating senior in each of the four divisions.

Each year the UW’s schools and colleges select accomplished students to lead their degree candidates into Husky Stadium during the Commencement procession. These students are called gonfalonieres, because they carry the school’s gonfalon, a banner that hangs down from a crosspiece and bears that school’s name and symbol, a tradition borrowed from the Italian Renaissance.

Chenyibo is from Daqing, China and chose to learn French and Mathematics because she enjoyed learning languages and doing computations and was "attracted by the charms of numbers and alphabets!"

At the UW, she "caught language fever, and studied Chinese, English, French and Spanish." She received an Eiffel Scholarship, established by French Government and served as a volunteer translator in international meetings and TV programs.

Chenyibo would like to thank to her parents, grandma, friends, professors and everyone who helped her along the way. She says of her time at the UW "you will never know what you can do until you try!"