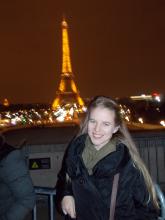 Kelsey Jackson, (class of 2013) a French and Psychology double major recently completed her Master of Science (MSc) in Psychology Research Methods at the University of Kent in Canterbury, England and acheived distinction for her original research project. Kelsey, a native of La Jolla, CA says that her "time in the French department at UW was, without a doubt, pivotal to my ability" to design and create the research project for her MSc. After graduating from UW Kelsey spent a year in Nancy in the Teaching Assistant Program in France (TAPIF).

In France, Kelsey was placed in one of the region's only bilingual elementary schools working with 1st grade students where half the day the students were taught in English and the other half in French. Kelsey says "her exposure to these kid's journey with language learning had huge impact how I was able to conceptualize and evaluate the methods used to study bilingualism and its impact through the psychological lens." With this real life sense of bilingual learning from her time being student at UW, teaching English, and learning Spanish growing up helped her "creatively critique prior literature and plan her dissertation."

Kelsey's project entitled "Facilitating bilingual perception and prediction using gender-specific stimuli: An infant eye-tracking study" "evaluated whether the one-parent-one-language rule in bilingual households actually assists infants in distinguishing between two languages and whether it helps them use that distinction to know whether the new vocabulary words they hear daily belong to one language versus the other." Her findings suggested that that accepted practice of one parent speaking one language in bilingual homes doesn't negatively affect language learning in young children but it actually may not be very helpful. Kelsey is thankful to all of her instructors at the UW "who encouraged me to use my degree and spend time abroad, living and speaking in French, as it broadened my personal horizons and bettered my potential career trajectory."