Men Who Stare at Cats 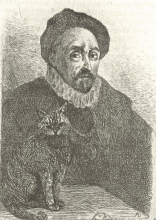 Louisa Mackenzie, Associate Professor of French, recently presented, “Men Who Stare at Cats: Renaissance (Post)Humanism and Animal Inscrutability,” as an invited guest of the Early Romancee Studies Research Cluster at  the University of British Columbia, November 5, 2012.

Summary: Early modern humanism puts animals at the centre of many of its most profoundly ethical questions, and anticipates much of what is currently being done in Critical Animal Studies and the posthumanities. Long before Derrida's cat stared back at him, 16th-century philosophers and poets were marvelling at the ways in which cats (and other animals) returned their gazes, throwing into question the basis of any epistemological certainty.