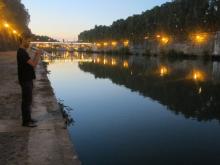 We are delighted to announce that for the fourth consecutive year, an undergraduate major from the Division of French and Italian studies has been selected to receive a Dean's medal.

The Dean’s Medal awards are presented  annually to one outstanding student in each of the College’s four divisions:  arts, humanities, social sciences, and natural sciences.  Selection  of the awardees is based on high scholarship and letters of recommendation.

This year's Dean's Medalists were also automatically given a Timeless Award this year in honor of the 150th anniversary of the College of Arts and Sciences.