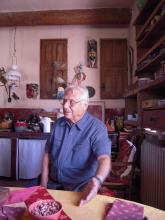 Professor Emeritus Constantine Christofides died on June 24th 2020, at 92, in Manhattan, the shortest bus ride from the Cloisters, the American capital of Medieval art.

He was twice, in its two versions, Chair of French and Italian, first as head of Romance L. and L. and then, in its early days, of our current unit.

Born in Alexandria in 1928, he made his way to the University of Michigan where he finished his Ph. D in 1956.  Before arriving at the UW—as Chair of Romance, in 1965--he had taught first at the University of Iowa and then Syracuse.  After seven years with us—at the time a large unit!—he became, briefly Chair of Comp. Lit., and then divisional Dean. He migrated to Art where he was first Chair of Art history and then Director of the School between 1979 and 1992.  Followed the brief return to FIS, as Chair in 1996-97.  In retirement from UW he taught art history at the Institute for American Universities in Aix-en-Provence (1997-2010).  There he lived in a sixteenth-century castle—with /artist/wife Koren (ingeniously modernly Romanesque) and Cezanne’s Mont Sainte-Victoire for closest company.  His last decade was spent pressed against Fort Tryon Park in Upper Manhattan—What a view of the Hudson River!  Never has the man been accused of not knowing how to live.

He wrote on the French literature of the seventeenth and twentieth centuries, but above all on medieval art—see his vast Art of the West: Medieval to Modern Times (1996).  Note here the unembarrassed skew towards the forms of the Romanesque—its affection for the neglected, for glory found in modest, misshapen or fantastical things, the charmingly rude, its distrust of what was greedy for admiration, for the virtuosic, the “masterful,” its sense of wonder not always distinguishable from a not always delicate sense of fun. The photos here, by the author—often taken at unusual angles—are themselves works of consequence.