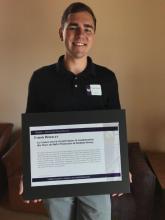 French and intended Human Centered Design and Engineering major Ethan Thomas Walkley recently won a $1000 Grand Prize in the Senior Non-Thesis Category of the Library Research Awards. His paper, "La Censure sous le Second Empire: la Condamnation des Fleurs du Mal et l’Innocence de Madame Bovary" was the culmination of a year's worth of research and writing, spanning two French courses and a quarter of independent study. Read his comments about the inspiration for, and process of developing, his award-winning essay:

"I was not familiar with this topic until I took French 304 this fall with Geoffrey Turnovsky. Towards the end of the course, we began working on research papers that would serve as final projects, and we were presented with a list of possible topics. Among them was the censorship trial surrounding Gustave Flaubert’s novel Madame Bovary, which took place in 1856 under France’s Second Empire. I chose this topic because it was unfamiliar to me and therefore intriguing, and I enjoyed writing and researching for it so much that I decided I would continue delving into it. During winter, I took French 376 with the same professor and had the opportunity to learn more about the institution of literary censorship and how authors and censors often worked together to navigate its boundaries. Then this past spring, I worked independently with guidance from Geoffrey Turnovsky, focusing on the censorship trial of Charles Baudelaire’s Les Fleurs du Mal to generate material for the second half of the paper I would be submitting for the research award. Thus, this topic is one I have had nearly a year on which to meditate. It was the focus for the first large-scale research project I had completed in college, and so it forms part of a special landmark in my academic journey. Lastly, having only narrowly explored literary censorship in France, I would like to augment my knowledge of this topic by continuing to learn about the origins of this institution and specifically how certain works were flagged and condemned." 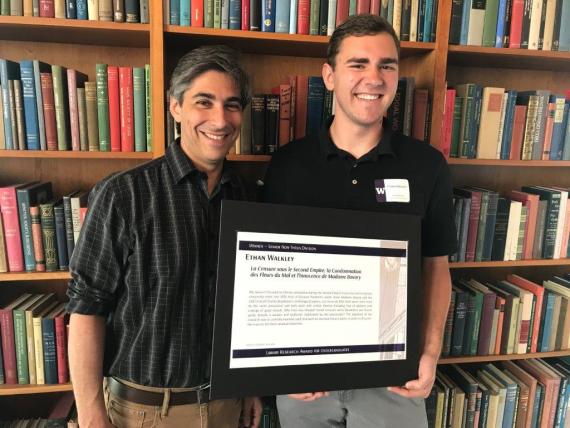 For his excellent coursework, Ethan has been nominated by the French & Italian Studies Department for humanities scholarships and has made the Annual Dean's List for the past two years. He is also an accomplished musician, serving as the principal chair clarinet for the Campus Philharmonia Orchestra.