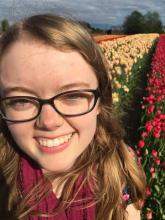 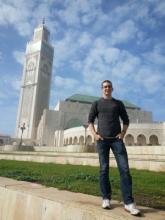 The 2017 Husky 100 were recently announced and French & Italian Studies is proud to have two French majors and one minor among the recipients. The prestigious award recognizes 100 UW undergraduate and graduate students from Bothell, Seattle and Tacoma in all areas of study who are making the most of their time at the UW. The Husky 100 students actively connect what happens inside and outside of the classroom and apply what they learn to make a difference on campus, in their communities and for the future. Through their passion, leadership and commitment, these students inspire all of us to shape our own Husky Experience. Below are profiles of our recipients.

Monica Airut Murphy, a senior French and International Studies double major cares about the world outside UW and wants to use her knowledge of French to advocate for the rights of others. Monica grew up with French in the home as her mother and grandparents are from Lebanon. She attended a French immersion preschool and later studied French in high school. Hearing French at home sparked her interest in other cultures and underrepresented communities. Monica comes from a big family; she once took a French class with her twin sister and older brother at UW.  She credits her study of French and the time she spent living in Nantes with the UW study abroad program for challenging her perspectives and enhancing her “cultural understanding.”  Her true passion and academic interests are in human rights, specifically immigration and refugee rights. She recently volunteered with the Refugee Women’s Alliance where she worked with high schoolers from the horn of Africa on basic job skills and preparation. Monica knows she wants to study or work for underrepresented and marginalized communities after her time at UW. In her spare time Monica sails competitively and teaches sailing to children. Monica identifies most with the Husky 100 ideal of commitment to inclusive community; she feels that understanding another language has given her a deeper comprehension and appreciation of the diverse world around her. Monica is still making her post-graduation plans but hopes to attend graduate school in a French speaking country.  However Monica knows she wants to work advocating for the rights of others; she has “big dreams” of one day working in an organization like the Human Rights Watch at the UN.

Martin Horst, a senior French and Linguistics double major, is passionate about languages and studying the intricacies of them. Martin grew up in Seattle where he developed an interest in French in part because his mother had spent a year living in Belgium. After studying French at the international baccalaureate level, Martin continued his studies at the UW where he developed his passion for French and linguistics. He credits associate professor of French and department chair Rich Watts for inspriring his interest in the greater Francophone world, which led him to spend a year studying abroad in Morocco at Al Akhawayn University. There he studied French and Arabic and also conducted interviews with young Moroccans about their language identity. Intrigued by his experience abroad, Martin then took time off work on research project with the UW Institute for Learning & Brain Sciences (I-LABS) while learning Spanish and living in Madrid. Martin says French has made him “want to connect with more people of a diverse background.” He is excited to continue his studies next quarter with assistant French professor Maya Smith working on his honors thesis which will expand on the research on language identity he did while in Morocco. When he is not studying new languages Martin enjoys ultimate Frisbee, serving as the captain of his team at the UW. After graduation Martin plans to continue working at a Lindamood-Bell Learning Center where he teaches children and adults with learning disabilities reading comprehension. Martin most identifies with the Husky 100 ideal of the discovery mindset, constantly seeking new experiences and intellectual challenges. He is considering various doctoral programs in French and linguistics but plans to go abroad again to teach English with the Teaching Assistant Program in France (TAPIF) to further his passion for teaching, languages and Francophone culture.

Kelsie Haakenson, a History and Computer Science double major with a French minor has been able to connect the dots between all three of her fields of study through innovative projects using French and her technology skills. Kelsie grew up in Woodinville, WA and began studying French in high school, intrigued by French culture and the beauty of the language. When she came to the UW, Kelsie realized she was truly passionate about learning new languages be it spoken ones or in computer science. She credits French lecturer Hélène Vilavella-Collins for having a “huge impact” on her study of French as a professor and the leader of her study abroad program at the Université de Nantes. Learning French she says “opened a whole other avenue to the study of history” as she is now able to conduct research reading primary sources in French for a number of research projects. In associate French Professor Rich Watts’ class she completed a project on the Memorialization of the Algerian War in France which developed her interest in the field of historical collective memory. Kelsie continued her work in French history; working on the Newbook Digital texts project in which she helped translate and digitize French diaries from the nineteenth century. In her honors thesis, for which she received the Thomas M. Power Prize Honorable mention Kelsie continued her work in historical collective memory. Her thesis explored how French intellectuals drew on World War II memory to support their arguments for and against the Algerian War. In her free time Kelsie is just as active; she enjoys swing dancing, skiing, and playing the piano and violin. Following graduation Kelsie plans to work as UX designer or front-end engineer. She hopes to use this experience to transition into a career as a digital historian working on digital multimedia research publications in collective memory studies and French history.