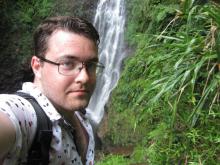 Senior Kendall Mathew has received a Foreign Language Area Studies Fellowship (FLAS) to support his study of Italian during the 2016-2017 academic year. The FLAS is a prestigious award offered to undergraduate students who are learning a language commonly underrepresented in higher education. After having studied French in high school and declaring it as his major at UW, Mathew began enrolling in Italian classes as well during his sophomore year. "I immediately fell in love with the language and I declared it as my minor not long afterwards," he said. "For me, the FLAS is a vote of confidence... it helps me feel less alone in a university that focuses so heavily on more technical degrees." Although he was listed as an alternate for the FLAS the first time he applied, Mathew persevered, with the encouragement of FIS advisor Sabrina Tatta. "[Sabrina] is an advising superstar," Mathew said. "She is the one who is always there to set me on the right path, and she was the one who was always encouraging and supportive when I didn't get the FLAS the first time I applied. Plus, she's just fun to talk to." Receiving the award the second time around, after being wait-listed yet again, "was definitely a surprise, but a welcome one."

Mathew is hoping to pursue a career in language education, starting after graduation with the UW Masters in Teaching Program. "I would very much like to be a high school French teacher. Both my teachers in high school were absolutely superb, and they inspired me to follow a path into education," he said. "Concurrently, I'd like to try bringing more exposure to underrepresented languages, such as Italian, into the public school system." In his senior year of high school, Mathew studied abroad in France for ten days during spring break, and at UW he participated in the Environmental Cultural Studies in the French Caribbean program, led by FIS professors Rich Watts and Maya Smith. "I think exposure to new languages is a very important part of someone's education not only as a student, but as a citizen of the world itself," Mathew said. "Many of my own enriching personal experiences have come thanks to my education in foreign languages, and when it comes to languages, the more, the merrier."