A message from Richard Watts, Chair of French and Italian Studies, regarding the recent events in Paris. 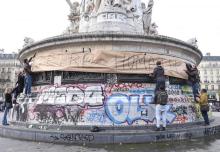 “J’être humain.” This odd, ungrammatical phrase scrawled on a banner on the statue at the Place de la République in the heart of Paris, not far from where scores of people were killed on the night of Friday, November 13, stands somewhat in contrast to the phrase “Je suis Charlie,” which became the rallying cry following the attacks by radical Islamists on the offices of Charlie Hebdo and a kosher supermarket on the outskirts of Paris in January 2015. “Je suis Charlie” indicated solidarity with a set of values that could be interpreted (and sometimes was) as relatively narrow. “J’être humain,” which can be understood to mean “I (am a) human being” or, if one takes “être” as an infinitive, “I to be human” or simply “Be human,” points us toward a truly collective response. This is, of course, a reflection of the less targeted—in fact, wholly indiscriminate—nature of the recent killings, but is also a means of signaling a form of solidarity that is inclusive and, as Barack Obama put it, universal. It is hard to imagine a more apt or effective symbolic response to such mindless acts.

The students, staff, and faculty of the Department of French and Italian Studies stand resolutely in solidarity with the people of Paris, Saint Denis, greater France, and elsewhere whose lives are the targets of sectarian violence and the politics of hate. “Nous être(s) humains.”