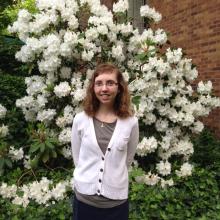 We're delighted to announce that Christina Sztajnkrycer, a third year PhD student in French Studies, has been selected by the Stroum Center for Jewish Studies to receive a Jewish Studies Graduate Fellowship of $3,000 for the 2014-15 academic year.

Christina's research interests include 19th- and 20th-century Jewish identity in French and Francophone literature. Nineteenth century France played a big role in the development of "the Jewish question" as it was the first European country to offer citizenship to Jews and to abolish all restrictions limiting their participation in society. Christina is interested in how this new Jewish presence is portrayed in 19th century Parisian literature and 20th century North African novels of Jews writing in French under French colonial influence.

The Jewish Studies Graduate Fellowship was established to support students who are researching various aspects of the Jewish experience. The goal of the fellowship is to build an intellectual community around Jewish Studies. Fellows participate in a workshop series to foster professional development and advance their research agendas. All awardees present their work at a Spring Research Symposium in Spring Quarter.