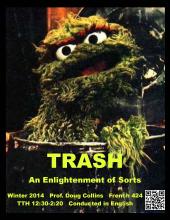 Jesus looked directly at them and asked: “Then what is the meaning of that which is written: the stone rejected by the builder has become the keystone?” (Luke 20:17)

“I've a clock that won't work,” says Oscar the Grouch, “an old telephone, a broken umbrella, a rusty trombone.” “ And I am delighted to call them my own!” he crows, within the default logic of “critical theory.”  And thus hardly unique to Deconstruction was its focus upon miserable objectality that concludes a vast history of reflection upon the meaning of delight in distressed materiality.  So urgently expressed is this affection that there is the temptation to describe it as the consensus gateway mediation of modern philosophy and literature.  Central is the matter of the relation of trash the noun to trash the verb.  Who and what is at the end of the process that concludes in indifference, in repulsed unknowing?  Decisive is the matter of the relation of trash to the function of representation itself in the West.  What is the relation of it to the temporality of trash, the agency or the absence of an agency in the fatalism of a narrative of retribution, of the location of a responsibility for a spectacle of degradation?  Free-for-all-objectality and its attendant joy in a condition of unconcern will be encountered in the writings of Rousseau, Kant, Schiller, Wordsworth, Hegel, Nietzsche, Flaubert, Ruskin, Proust, Heidegger, Bataille, Adorno, Benjamin, Sartre, Levinas and Taleb, among others.